Fresh website and look with an online marketing campaign to ramp up leads! 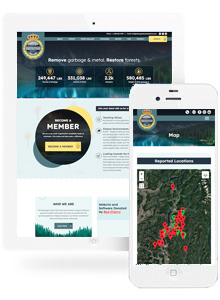 The Okanagan Forest Task Force was formed in August, 2016 by a group of outdoor enthusiasts who were concerned over the growing epidemic of illegal dumping in our forests, recreational areas and along natural waterways. Our first official clean-up occurred on September 10, 2016 at a popular shooting range along Postill Lake Rd in Kelowna, BC. That first effort resulted in the removal of more than 3 metric tonnes of garbage by a group of 15 volunteers. Custom mapping software, apps, website, donation, marketing, sponsor onboarding have all been donated by Red Cherry.

Websites That Accelerate Your Business